As some of you may know, there is a massive outbreak of cholera ongoing in Yemen right now. Sadly, as noted by Jan Egeland, there’s been little response from donor states and aid agencies – especially in comparison to the West African Ebola outbreak that I worked on a few years ago:

This is a reflection of the vulnerability perceived by donors & agencies (real or not), e.g. #cholera isn't scary to Americans; #Ebola was. https://t.co/CmcubjSvST

From my quote tweet above, my own hypothesis about this phenomenon is evident… Which gave way to a series of fantastic conversations on awareness and risk perception w.r.t. both of these aforementioned contexts (i.e. cholera in Yemen and Ebola in West Africa).

There are a number of computational epidemiology methods that can be used to start quantifying awareness and risk perception (within these contexts and otherwise), which I’ll touch on a bit today. However, before I go any further, I should note that this work is preliminary; I’m simply using this space to get some ideas out to make collaboration across disciplines a bit easier. While computational epidemiologists like myself can bring some useful tools to this kind of problem, proper study of awareness and risk perception requires the insight and wisdom of social scientists and science communicators, too. (Though I dabble a bit in scicomm, it isn’t my full-time profession; I’ve also taken a handful of classes in social science, so I’m a novice in that space at best.) So, if anything, let’s treat this post as a brainstorm of compepi methods that might be useful in a situation like this.

Those of you that follow my work know that Google trends is one of my favorite data sources for assessing awareness. Risk perception is a bit trickier to address; in my own research, it usually involves sentiment analysis of Twitter data (or a similar equivalent) and is generally more complex. With that in mind, I’m going to stick to exploring awareness today (though I would love to pursue risk perception in the future with anyone that’s interested).

Going into this (very simple) data exploration, I hypothesized that worldwide*, folks today are less aware of the ongoing cholera outbreak in Yemen (present) than they were of the West African Ebola outbreak (past). To test the hypothesis, I ran a Google trends query to compare search interest in [cholera Yemen] and [Ebola “West Africa”] (learn more about the use of punctuation in Google trends here). Given that the first case associated with the West African Ebola outbreak occurred in December 2013, I set the time frame of my query from December 2013 to present. Here’s what I found: 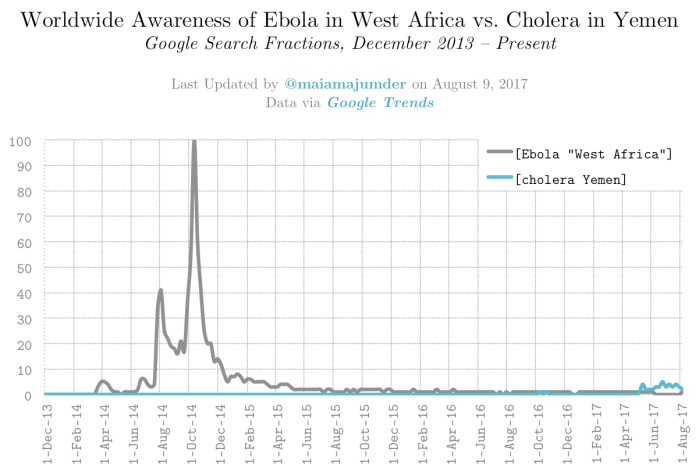 This chart shows weekly search interest – a proxy indicator for awareness – in the West African Ebola outbreak relative to the ongoing cholera outbreak in Yemen. A score of 100 indicates peak interest in the search term within the time period specified, and when more than one search term is included in the query, interest in the less popular search term may be interpreted as relative interest (as compared against the more popular term). These data are volume-adjusted, which you can read more about here. 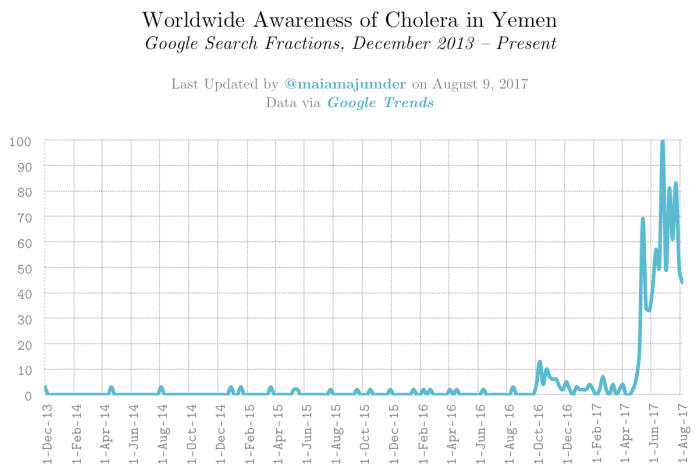 So, why is awareness important? Perhaps the simplest (and most optimistic) explanation is that, in many countries, what the public knows about and cares about is critical to state- and agency-level decision-making. (For example, in the United States, making your interests known to your representatives can actually make a difference – even though it may not always seem that way.) We don’t need to look any further than the Google trends chart of search interest in the West African Ebola outbreak to see anecdotal evidence of said decision-making. Worldwide awareness of the outbreak was climbing well before the WHO declared a Public Health Emergency of International Concern – a trend that may have influenced the declaration itself.

Google trends and other novel data sources like it offer an inexpensive alternative to traditional monitoring and evaluation techniques – when it comes to awareness and otherwise. These data sources are highly imperfect, of course…But, I believe that they can still provide valuable insight – especially when combined with methods from other disciplines. (In short? Let’s collaborate!)

*Though I could’ve constrained my query to a certain locality (like the United States), I decided to stick to worldwide search interest because relevant donors states and aid agencies aren’t restricted to any one country.